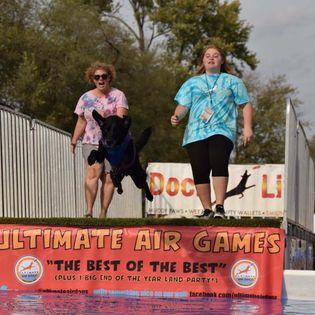 Hello, my name is Catherine Hentz and I have been dock diving since 2010. I am 19 years old and have traveled to 12 states for dock diving competitions. I believe having fun with your dog is the most important part of this sport. I have had many adults ask me to compete with their dogs because they were too nervous. I set many records with friend’s pups. I have enjoyed jumping dogs since I was 8. My service dog Corey and I competed together for at least 8 years. Together Corey and I completed many titles in Dock Dogs, Ultimate Air Dogs, and NADD and we won many honors over the years. A few of them are: Youth Handler of the Year for three years in a row. I won the most inspiring team in the Nation for Dock Dogs and Corey and I were invited to the Dockdogs world championship three years in a row and Corey got his personal best in EV at 5’10” at his last Dockdogs world championship. In 2014 I competed with my friend Amanda’s dog named Georgia. Together we won many competitions in Iron Dog competing against the top adults. In November of 2014 we headed to Iowa and that awesome little dog and I won First Place Iron Dog Titan. Then the next Spring Georgia and I were asked to compete in Fetch It at the Purina Incredible Dog Challenge. Georgia and I ended up in 2nd place with a 21-foot grab.

Many breeds are natural-born swimmers. Many breeds will swim with little encouragement, but some dogs may need more coaching.

Has Pre-requisite
Request a ConsultationSign Up

If your dog loves to play fetch and he can’t get enough of the water, this activity is for you! This fast-growing dog sport is an exhilarating and simple way to blow off steam while bonding with your beloved pup.

Has Pre-requisite
Request a ConsultationSign Up
View Full Schedule


© Your Canine PhD. All rights reserved.

Designed with  by Amanda Worthington